What a year this has been! Despite “all of this” I have been busy! First, I want you to take a look at my shop. I have finally figured out how to list products properly!

My newest product is a pizza pan. I know, that doesn’t sound very amazing but watch Emmy’s video!

Lloyd Pans Kitchenware 10 by 14 Inch Detroit Style Pizza Pan (here’s the link) is AMAZING! We made the pizza exactly like Emmy and, I’m telling you, this is just amazing! Look!

Not only is the crust crispy (not tooth-breaking hard) BUT none of the cheese stuck to the pan. I can’t wait to try low carb pizza or lasagna in this!

I have a few more items to add to my store (and some videos to make) but this year has been a focus on me.

I can feel the weight of 2020 lifting a little, though I know the world outside of my house will still be fraught with trials and tribulations. I am thrilled I was able to accomplish (or begin) as much as I have while maintaining my sanity. I hope you all have been able to do the same this year. If not, you can always start today! So, we’re wandering around the store, wondering what we’re going to have for dinner (since we were out so late). Hubby looked at the carb count on Banquet chicken (which we knew would be high) but it got me thinking. So, I started looking at all of them. These only have 1 carb per serving with approximately 5 servings per package. Even if I scarfed the whole thing, it would only be 5 carbs total! I’m tickled!

http://www.fosterfarms.com/products/product.asp?productcode=90970
Now, I know I like the wings above (because I used to buy those all the time) but there was another kind that only had 2 grams of carbs (total) per serving. They are Tyson Tequila Lime Chicken Wings. Now, the only package they had was larger than the Foster Farms but ONLY 2 CARBS PER SERVING!!! 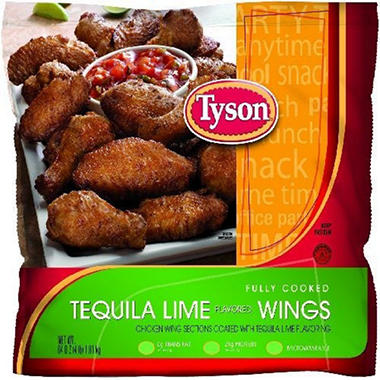 Well, when we went to the store, I was going to get some more tortillas (I don’t eat them often but it sure is nice to be able to grab one if I want it). Well, they didn’t have the same brand! How dare them! So, I grabbed two others, so I could try them out.
Tortilla #1: La Tortilla Factory High Fiber/Low Carb tortillas

The first one (which I mentioned in that other post) is La Tortilla Factory High Fiber/Low Carb tortillas. These come in a 10 count package and each tortillas weighs 36 grams (I’m sure that’s important to someone since either a ton of people input the wrong data into My Fitness Pal or there are different weights/sizes out there. For those using it, here’s the link to this tortilla on My Fitness Pal: La Toritilla Factory – Low Carb High Fiber Whole Wheat Tortilla Notice the misspelling? That’s why it took a while to find this). This is the other one I mentioned that contains soy.  This was good, though tasted dry and less wheat-like than the Sol Del Oro.  The carb count is 10g total with 7g fiber.  So, 3 net grams carbs (one more that the Sol Del Oro).  These can also be purchased from their website (if you can’t find them in local stores … I have no idea how far and wide these are carried): La Tortilla Factory High Fiber/Low Carb tortillas.

These do not have soy but have wheat protein isolate (I had no idea that even existed) and sucralose (Splenda).  Now, these have DOUBLE the carbs of the tortillas above (19g total carbs, 13g fiber) but dear Lord!  These are flour tortillas (like normal, store-bought flour tortillas)!  Unfortunately, their website is awful: (This is the closest link I can give you, and it’s not even the right product) Mission Low Carb Tortillas and they have no links, such as “Buy Online” or “Where to Buy” so your best bet is to just Google the dang things. We bought ours at Smart Foods (Save Mart Foods) but some of the Google results showed Walmart and Netrition (online).  BUT if you can find these (and spare the carbs), they are well worth it!  Real Tortillas!