The first loaf of bread I ever made was challah.  I had to be … maybe 12 years old?  I don’t remember the exact age but do remember where we were living (so that narrows down the time frame a bit).  I also remember that beautiful loaf of bread.  It was gorgeous and HUGE!  I was so proud!  Well, until I cut into that dark golden crust to find raw dough (just about an inch of the dough had cooked … the rest was raw as can be).  That was also the last time I made bread until I was an adult.  I’ve made bread that resembled a chunk of concrete to bread that resembled a dried glob of glue but I was determined.  It’s taken me many years of trial and error to figure out exactly how long to knead and  how much flour/liquid to add to obtain the right consistency.   I’m very happy with my bread making skills (I’ve worked hard for them 🙂 ).

So, while trying to figure out a way to pay back my neighbor for finishing off the front yard that we started whacking on Valentine’s Day, I decided on challah.  I have been wanting to make it so long and this time (yes, this was the first time I had made it since that day too many years ago) it was beautiful (and edible)! I used a recipe I had written down and stuffed in my binder of recipes.  I have no idea when I wrote this down or who it was who originally shared it (may have been a friend who lives in Israel) BUT I discovered (while doing my favorite activity … searching the internet) a woman who pretty much uses the same recipe on You Tube!  The recipe she uses makes 4 huge loaves.  The recipe I have makes 6 standard loaves (so, just cut the dough into 6 pieces instead of 4 and you are good, unless you have a large family or are making this to take somewhere).

So, here is the playlist of her videos, plus a couple more.  The first video is an amazing demonstration of various ways to form/braid rolls and loaves.  I just sat there with my jaw open, in shock that there are so many different ways to manipulate the dough!  The second is a woman demonstrating the various braiding methods for loaves: from 3 strands up to 9 strands.

AND here’s my bread:

I cut the dough into 6 sections and made 4 loaves.

See that ugly loaf?  That’s what happens when you forget to grease your loaf pans!  Here’s a close-up: 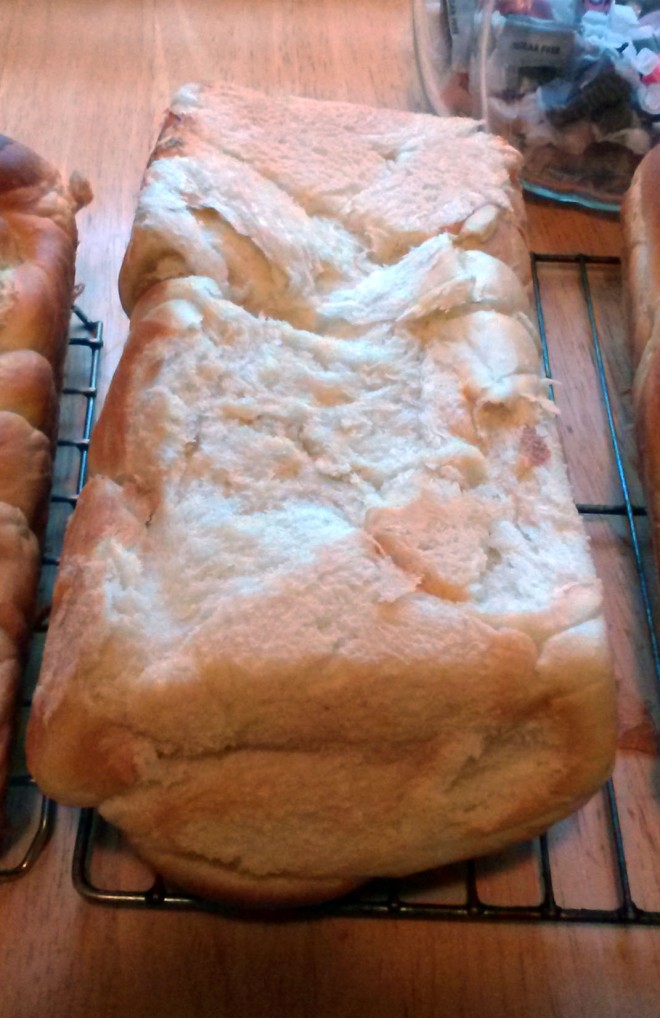 The bottom of the loaf stuck like crazy to the pan.

So, those took care of four of the dough chunks and this is what I did with the other two.  I cut each of them into 6 sections and made sandwich rolls out of them.  Now, these look beautiful but I cooked them way too long.  That’s what happens when you turn the timer off (because they weren’t quite brown enough) and then proceed to talk to the neighbor about how her grandson is doing.

3 of these large rolls is the equivalent to one loaf.

And here’s the recipe I used:

In a large bowl (remember, enough dough for 6 loaves of bread), pour in the warm water (How warm?  I test on my wrist: if it doesn’t make me flinch, it’s good.  For more specifics, check out this web page: Yeast Is Fussy About Temperature) and whisk in the yeast and sugar (I use Saf-Instant.  I don’t bake a lot  so once opened, I store it in the freezer.  I have had the most consistent results from this yeast even when it has expired).  Let sit in a warm spot until it looks like a layer of foam is across the top of the liquid. 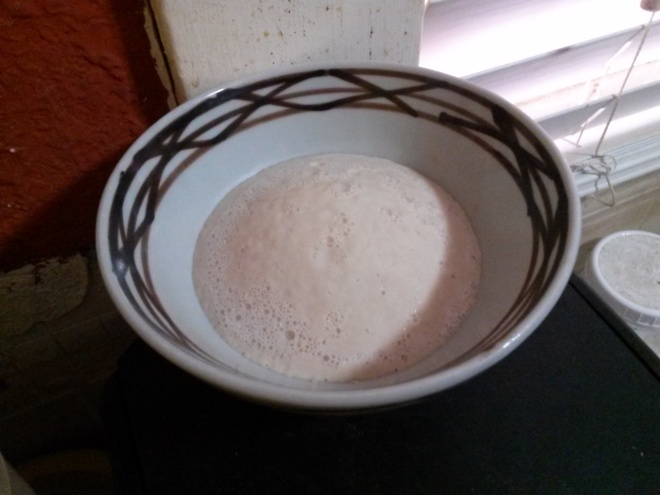 In a smaller bowl, break the eggs into it and whisk in the salt and oil.  Once the yeast is ready (proofed), whisk the egg mixture into the yeast until everything is well incorporated and you can’t see chunk of egg.  Now, for the fun part: adding the flour.

Using a large spoon, stir the flour (1 to 2 cups at a time) into the liquid.  Keep doing this until it feels like your arm is going to fall off (I tried making large batches of dough like this when I had a working Kitchen Aid mixer … it wasn’t pretty and is probably what lead to it dying).  Then, on a large surface (counter top, kitchen table, whatever will work as long as it is sturdy) sprinkle about 1/4 cup or so of flour and turn your dough out onto the floured surface.  Time to knead in more flour.

This is where I used to mess up.  When a recipe called for X-amount of flour, I used it all.  The amount of flour you use depends on so many factors from the humidity in your house to the size of the eggs you use to what kind of flour you are using that you need to pay attention to how the dough is behaving to determine how much flour you really use for a certain recipe.  I typically add (to the bowl) all but the last two or so cups, then add more flour while I knead.

Preheat your oven to 400 degrees F.

When the dough is ready place in an oiled bowl (I don’t have one large enough so I used my stock pot), cover with plastic wrap or a towel (I usually wet a towel with hot water, wring it out, and cover the bowl with it if I’m using a container that doesn’t like plastic wrap) and let rise until doubled (1 to 2 hours, depending on how warm your house is).  Once it is risen, punch the dough down and place it onto a very lightly floured surface.  Knead just a bit so you can form a nice ball, then separate into sections to make loaves or rolls.

Now, get the egg wash ready.  In a small bowl, beat the egg with the water and vanilla (if you are using it).

Each one of the loaves I did a 6-strand braid and the rolls were two strands each.  You can shape the dough however you want. Once shaped, brush with the egg wash and sprinkle with sesame seeds (if using).  Let the loaves rise until nearly doubled (1 or 2 hours).  Bake for 30 to 40 minutes, until the loaves are a deep golden brown.  Each one of my loaves were baked for 25 to 30 minutes and, because I got distracted, the rolls probably went for about 40 minutes.

AND my bread video is live! In the description I included a link so you can bypass the kneading (and rambling) part of the video. lol https://m.youtube.com/watch?v=a5wxAON66KY&feature=youtu.be #sprouting #sproutedgrains #ezekialbread #thm
OKAY! I uploaded my first video on YouTube about making sprouted grain flour. I didn't do too bad with my rambling (wait until you see the bread one ... I kept all of the kneading in, rambling the entire time lol). https://m.youtube.com/watch?v=IVtglUXS4Gs&feature=youtu.be #sproutedgrains #ezekialbread #thm #foodstorage #sprouting
Nothing says "I bought your information from a list" like an unsolicited home and auto insurance quote from a broker 70 miles away from you. This automatically excludes @libertymutual and @mutualofomaha from any of my business.